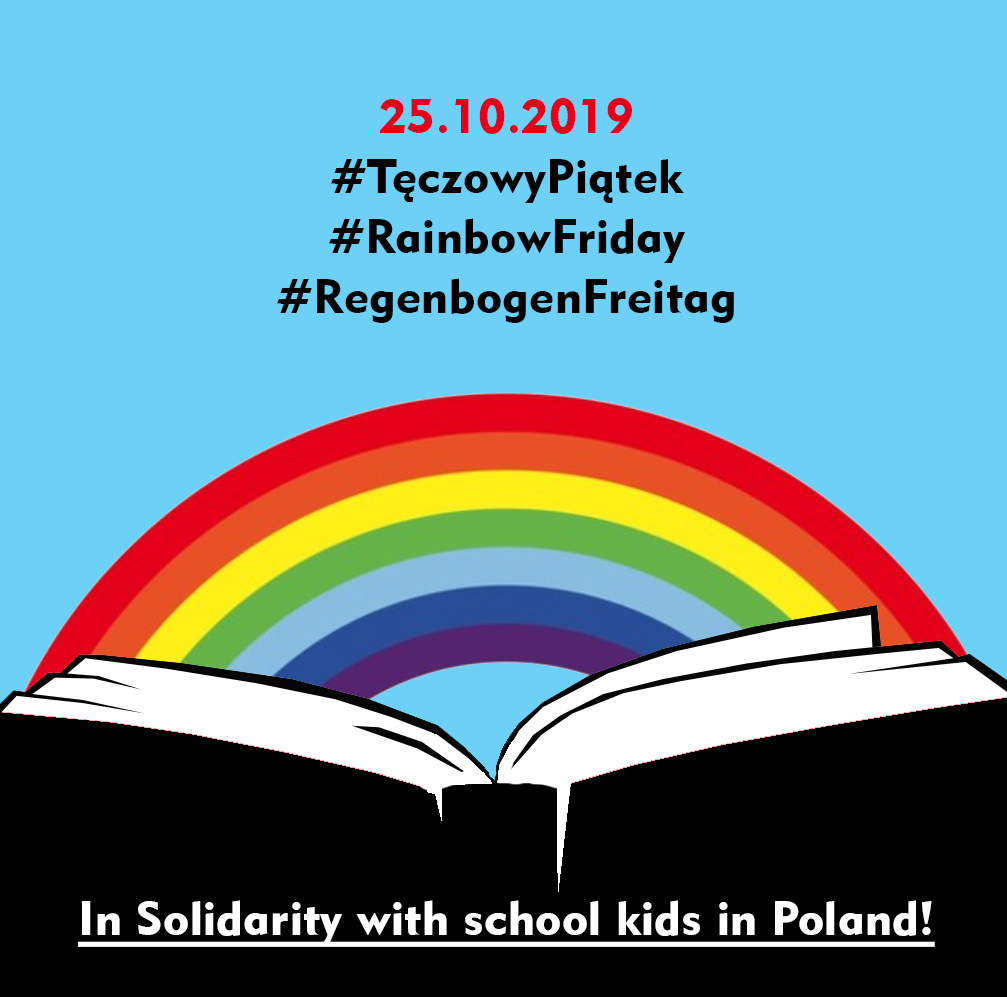 “Rainbow Friday” is a campaign initiated four years ago by the Campaign Against Homophobia. For one day – October 25, 2019 – Polish schools will organise support actions for LGBTQ youth.
Students and teachers choose and organize the program themselves, and schools will be full of rainbow props, posters, flags, and information brochures.

In 2018, more than 200 schools all over Poland took part in the campaign. Unfortunately, however, last year the Ministry of Education, Episcopate, right-wing media and ultraconservative organizations such as Ordo Iuris tried to spoil the celebration of diversity in Polish schools, describing it as a “dangerous ideology” which, without the parents’ knowledge, enters schools and threatens children.

The head of the “Solidarity” in Toruń asked teachers to “refrain” from participating in Rainbow Friday, referring to religion “Most of us have been baptized: it obliges us to support young people to avoid spiritual dangers, which God with His commandments warns us against”.

Barbara Nowak, the Małopolska education curator, claims that Rainbow Friday is illegal: “It cannot be that someone enters schools with a foreign ideology and spoils children.

TVP.info portal (national television) quotes an anonymous parent of a student of one of Warsaw’s schools and writes that the action takes place without the knowledge and consent of parents and “promotes LGBT”.

Right-wing “Gazeta Polska” refers to the homophobic words of Archbishop Marek Jędraszewski threatening that the “rainbow plague” is coming back to schools.

In view of the results of the parliamentary elections (13.10.2019), where Law and Justice party (PiS) received most votes, as the party based its election campaign on social polarization and anti-LGBTQ narrative, in view of the recent law on blocking sexual education, and the general hatred towards LGBTQ community, it is very important to support young people. We encourage you to show solidarity with students of Polish schools who organize Rainbow Friday actions in their schools and with LGBTQ youth. Let’s show young people in Poland that what they do is important and necessary so that they are not afraid to express their opinions and feel support, including international solidarity.

Following the guidelines of the Campaign Against Homophobia we invite you to participate! What can be done to support young people preparing for Rainbow Friday using social media?:

Facebook: use the #TęczowyPiątek frame on your profile photo [frame available HERE: https://www.facebook.com/profilepicframes/?selected_overlay_id=1190093661178816 ].

Call based on (Polish):
https://oko.press/homofobiczny-lament-prawicy-na-temat-teczowego-piatku-chca-chronic-dzieci-przed-potepieniem/?fbclid=IwAR0Iu1joZVzGsw1wRx5mJnHi8zGvdh5DqNocJ2IQTr2ZLGLpDoctekWQTas