„You forgot about Poland“ – this is what George W. Bush once said do John Kerry, who was listing foreign troops involved in military actions in Iraq. Is Poland still forgotten?
(Inviting us to the Gala fur Alle is definately a proof, that Polish people are not forgotten – thank you, it means a lot.)
Definately while listing dictators and/or right-wing conservative leaders like Orban, Putin, Le Pen, Erdogan or Trump, Jarosław Kaczyński is often forgotten (omitted, ignored?), but he is one of them. Kaczyński rules Poland even if he is „only“ chairman of the ruling party Law and Justice.
To our German friends: Poland is Germany’s neighbouring country, worth observing to draw conclusions from what can happen when right-wing conservative government is in power. To our American friends: what Kaczyński did to the democratic institutions and instances in Poland within over a year – Trump achieved in 2 weeks. Obviously, the US is a bigger country and Trump is more powerful, so it goes faster, bigger, better. Huge!
I forgot to mention something –actually Poland has a President. What was his name again? Not so important. Poland has also Prime Minister, a woman – Beata Szydło. Both are only puppets in Kaczyński’s hands without any real power.
Kaczyński‘s politics slowly but constantly drive Poland towards an authoritarian dictatorship. There are no more free media, Constitutional Court is paralysed, Judiciary is almost in the hands of the ruling party, separation of powers seizes to exist, education, economy and military systems are undergoing dubious reforms, art is being censored, religion is omnipresent. Just to name few „achievements“. Since over a year, Polish people go out on the streets to protest against governmental bills and laws.
It was in April 2016, as the Polish government announced plans to work on the abortion law in order to sharpen it (even more than it is already). Polish abortion law, the so-called Abortion Compromise, allows for legal abortion only in three cases: a severe fetal anomaly, a threat to the mother’s health and life, or a pregnancy from rape or sexual abuse. Polish women reacted immediately, thousands gathered in informal groups and grassroots initiatives like Dziewuchy Dziewuchom (we are Berlin section) and protested on the streets. It was surprising that PM Szydło agreed to initiate legislative process of limiting women’s rights.
Later in September, two legislation proposals were delivered to the government: “Stop Abortion”, proposing that all abortions would be criminalized, and “Save Women“ – a liberal proposal of women’s initiative. After the latter one was rejected by the Parliament, Polish women initiated the Polish Women’s Strike (OSK), inspired by women of Iceland who went on strike back in the 1975 (Iceland froze for a day). On October 3rd, the so-called “Black Monday”, thousands of women did not go to work and gathered on mass demonstrations, both in Poland and abroad. Some of you may remember the Black Monday demo, we organized at the Warschauer Strasse.
On this occasion I would like to thank you, Berliners, for showing up in so many numbers on that day – it was really important to us, we felt we were not forgotten. We, Polish women; we, women; we, people. Thank you for your solidarity.
Polish women stood together, feeling power and solidarity – the scale was beyond any expectation. The Polish government backed off back then – one battle won, but the war is far from over.
The idea of women’s strike spread and grew during women’s marches in the USA, as Trump was inaugurated for the President in January 2017. Later, on March 8th, the International Women’s Strike and other protest gathered thousands of women in the whole world, all united fighting for women’s right, for HUMAN rights. It was probably for the first time in history that so many people gathered for the same purpose on the same day on the streets. It was not just a regular Woman’s Day, it was a historical day, which we should mark and remember. On that exceptional day, we could feel the energy and the same spirit carried through our grandmothers and great-grandmothers who were fighting for their rights. That fight goes centuries back and it is still not over. On one hand, modern civilization and media of the 21st Century make it possible for such gatherings on the global scale, but on the other – how many women struggle for their rights still in the 21st Century! However, now we know what great forces we, women, have and if necessary we will stand together regardless nationality, profession or sex. We will not stop, we will prevail and we will win. Power to the women!
Anna Krenz Dziewuchy Dziewuchom Berlin 25.04.2017, Berlin
„Beata (Szydło), it is our call, that will make your government fall“ („Beata, niestety, ten rząd obalą kobiety“)
(Cover photo: Maciej Soja) 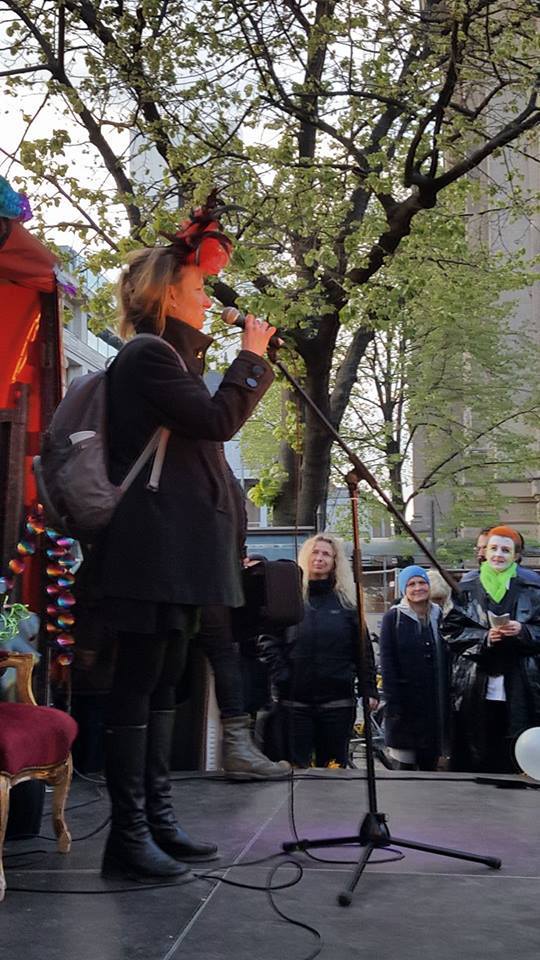