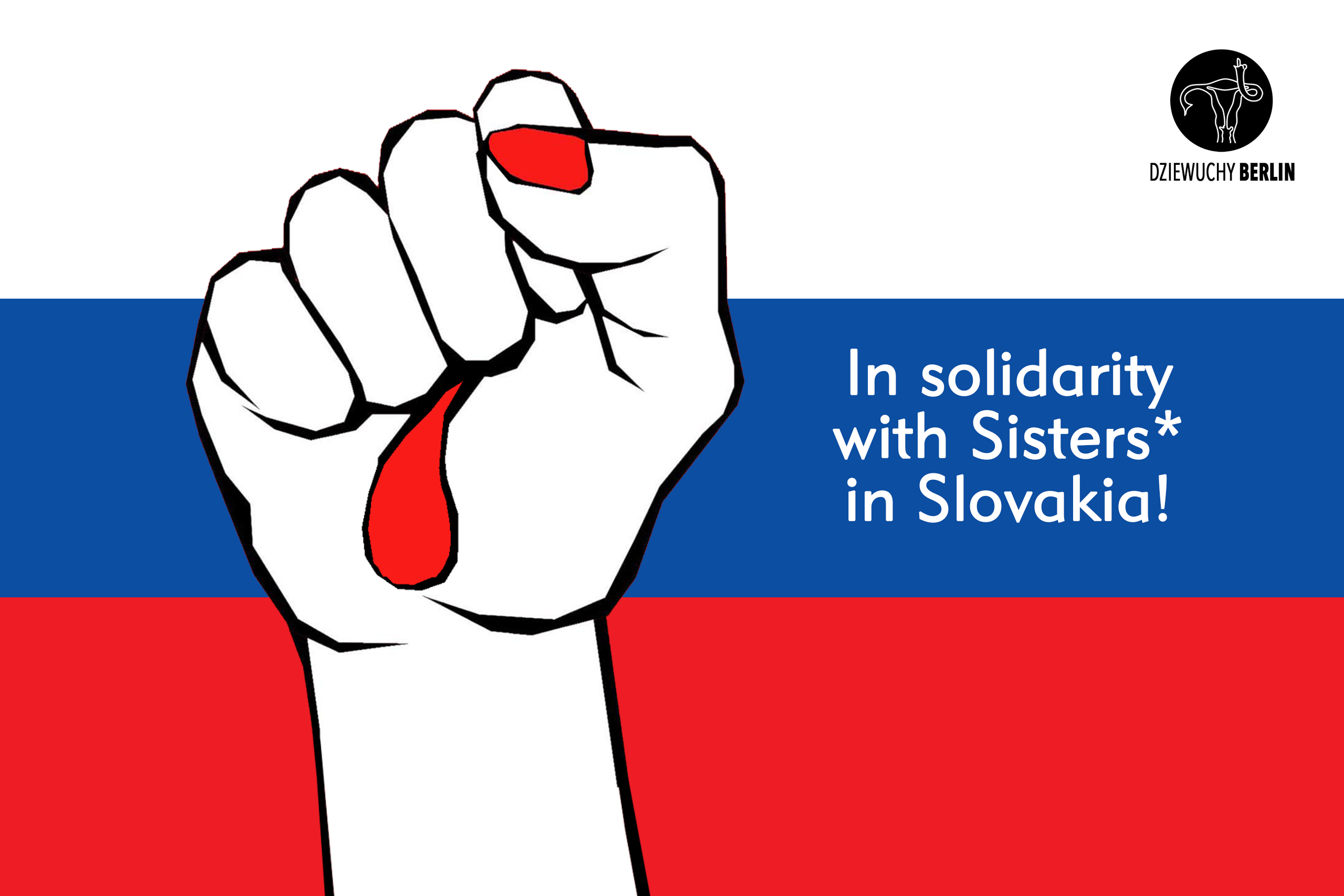 11 November 2021
Our rights are not given. We constantly have to defend them and fight for them. In Poland, in Germany, in many other countries. Also in Slovakia. Women* in Slovakia just won a battle. With one vote.
It is possible, that in 6 months the bill will be presented again.
Persevere, sisters! In solidarity!
“Slovakia’s parliament on Thursday narrowly rejected proposed legislation that would have tightened access to abortion in the European Union country. The bill was rejected by one vote, as 67 of the 134 lawmakers present in the 150-seat house voted in favour of it. A similar proposal to restrict abortion was rejected a year ago, also by one vote. The bill was submitted by conservative lawmakers for the Ordinary People, the senior party in the coalition government led by Prime Minister Eduard Heger.”
#NebudemeTicho #Wewontbesilent #Slovakia
https://www.euronews.com/2021/11/11/slovakia-narrowly-rejects-proposed-law-restricting-access-to-abortion
We, Dziewuchy Berlin and Polonijna Rada Kobiet+ (International Council of Polish Women+) also signed the solidarity letter addressed to the Slovak Parliament:
Members of the National Council of the Slovak Republic
Námestie Alexandra Dubčeka 1
812 80 Bratislava 1

Dear Members of the National Council of the Slovak Republic,

We are writing on behalf of 110 organizations to express our deep concern regarding current threats to women’s1 health and reproductive rights in Slovakia.

At this time Parliament is debating draft legislation2 that, if adopted, would impose new barriers to accessing lawful abortion care, harming women’s health and well-being, and undermining their decision-making and privacy. It would also significantly hinder access to medically accurate information on abortion. If enacted, the legislation will create dangerous chilling effects on the provision of lawful abortion care in Slovakia, putting the lives and health of women at risk, and increase the harmful stigma surrounding abortion.

The legislative proposals seek to extend the mandatory waiting period currently required before accessing abortion on request, and to oblige women to state the reasons for seeking an abortion and provide other private information when requesting an abortion. Such information would then be transmitted to the National Health Information Center. The proposals also seek to restrict the information that medical professionals can provide publicly about abortion care, and to strengthen the dissuasive nature of the information doctors are already required to provide.

The World Health Organization (WHO) has outlined that countries should ensure that women’s decisions to access lawful abortion care are respected and that abortion care is “delivered in a way that respects a woman’s dignity, guarantees her right to privacy and is sensitive to her needs and perspectives.”3 International human rights mechanisms have stressed that states must ensure the availability, accessibility and quality of abortion services in line with the WHO guidelines. They have called on states, including Slovakia, to remove barriers to safe and lawful abortion, including mandatory waiting periods, mandatory and biased counseling, and lack of confidentiality and privacy.4 United Nations treaty bodies have found that denial of access to abortion can amount to violations of multiple human rights, including freedom from cruel, inhuman or degrading treatment and the right to health.5 In addition, the European Court of Human Rights has held that states have “a positive obligation to create a procedural framework enabling a pregnant woman to exercise her right of access to lawful abortion.”6

Extending mandatory delays in the provision of safe abortion care: The proposed increase of the mandatory waiting period from 48 to 96 hours and its proposed application to all abortions except when the woman’s health or life is at immediate risk would substantially increase delays in women’s access to abortion care, thereby placing their health and lives in jeopardy.

The WHO has outlined that “[m]andatory waiting periods can have the effect of delaying care, which can jeopardize women’s ability to access safe, legal abortion services.”7 The WHO has underlined that “[o]nce the decision [to have an abortion] is made by the woman, abortion should be provided as soon as is possible” and without delay.8 Mandatory waiting periods also lead to discrimination and social inequities as they increase the financial and personal costs involved in obtaining lawful abortion by requiring at least one extra visit to a doctor prior to abortion.

Besides restricting doctors’ ability to publicly provide medically accurate information on abortion, the proposals seek to strengthen the dissuasive nature of the information doctors are already required to provide to women seeking abortion.

International human rights mechanisms have underlined that legal restrictions on evidence-based information on sexual and reproductive health, including safe and legal abortion, contradict states’ obligations to guarantee women’s right to the highest attainable standard of health. They have made it clear that “[s]uch restrictions impede access to information and services, and can fuel stigma and discrimination” and have called upon

The international human rights mechanisms and the WHO have also highlighted the states’ obligation to ensure women can access good quality information on sexual and reproductive health that is scientifically and medically accurate and to refrain from “censoring, withholding or intentionally misrepresenting” such information.13 To this end, the UN Committee on the Rights of the Child has recently urged Slovakia to ensure that “health-care professionals provide medically accurate and non-stigmatizing information on abortion.”14

Obliging women to state reasons for abortion: Requiring women seeking an abortion to state the reasons for their decision, which is often a very personal and private matter, could deter women from seeking care within the formal health system.15 International human rights mechanisms have already urged Slovakia to “[e]nsure the confidentiality of the personal data of women and girls seeking abortion, including by abolishing the requirement to report the personal details of such women and girls to the National Health Information Centre.”16

If adopted, this legislation will wholly contradict international public health guidelines and clinical best practice. It will undermine Slovakia’s compliance with its obligations under international human rights treaties to guarantee women’s rights to health, privacy, information, to be free from inhuman or degrading treatment, and the principles of non-discrimination and equality in the enjoyment of rights. In addition, the adoption of these proposals will be contrary to the fundamental international legal principle of non-retrogression. In its

2019 review of Slovakia, the UN Committee on Economic, Social and Cultural Rights explicitly urged the state to refrain from any retrogression in relation to women’s sexual and reproductive health rights.17

We call on all Members of Parliament to reject these regressive and harmful legislative proposals concerning access to abortion care and to refrain from further attempts to restrict and violate women’s reproductive rights in Slovakia.

1 Although abortion relates mainly to the experience of cisgender women, we recognize that abortion restrictions can have profoundly devastating impacts also on the lives of trans men and nonbinary individuals who have the capacity to become pregnant and may also require abortion care.

11 CESCR, General Comment No. 22, supra note 4, para. 41; Special Rapporteur on the Right of Everyone to the Enjoyment of the

15 While the draft legislation states that this information would be collected for statistical purposes, it would still be a breach of

women’s privacy to require them to fill in this information and provide reasons for abortion prior to receiving abortion care.