On Wednesday October 24th women in Iceland are planning to #WalkOutfrom work at 14:55 – the minute they stop being paid for their work due to the pay inequality accounting in Iceland for 26%.

Join Icelandic women to highlight gender earning gaps in your own country – there is not even one single country where women and men would be equally paid! Post a photo of you from your workplace, university, home with a paper saying:

Note that in most countries you should #WalkOut earlier than in Iceland!

Women‘s protests in Iceland have driven social change, and have inspired women in other countries to take action since their historic strike in 1975 when 80% of Icelandic women left their workplace at 14:16 pm. They would #WalkOut again in 1985, 2005, 2010 and 2016. Even though Iceland has one of the lowest gender overall earnings gaps in the world (“only” 26%), it has not still reached full equality.

We are looking for organisations and movements from all European and non-European countries who would like to join the action. Please contact us: lodzkiedziewuchy@gmail.com

Calculating the time of the Strike
The time of departure for women is calculated as the percentage of “income from work” that women get compared to men. Note: this is NOT the unexplained gender oay gap. We do not use the unexplained pay gap as it does not represent inequality in society. There are many variables which explain parts of the wage gap, for example women’s labor participation, women who work part-time work due to family and household responsibilities, gender segregation in the labor market (“women’s jobs” that get lower wages), power and influence (board members and managerial positions), longer absences from work due to childbirth, gender stereotyping, etc. Although these factors explain the wage gap, they do not justify women’s lower pay! The numbers we use in Iceland are tax statistics from Statistcs Iceland. They show that working women get 26% lower income from work than men. According to Icelandic law the working week is 40 hours.

This is a bottom-down action started by the Icelandic women’s protests, and supported at the international level by activists from numerous countries, especially the Polish femnist activists who felt inspired by Iceland when planning their own strikes for women’s rights in 216.

Together with other organisations and groups, Dziewuchy Berlin stand in solidarity! 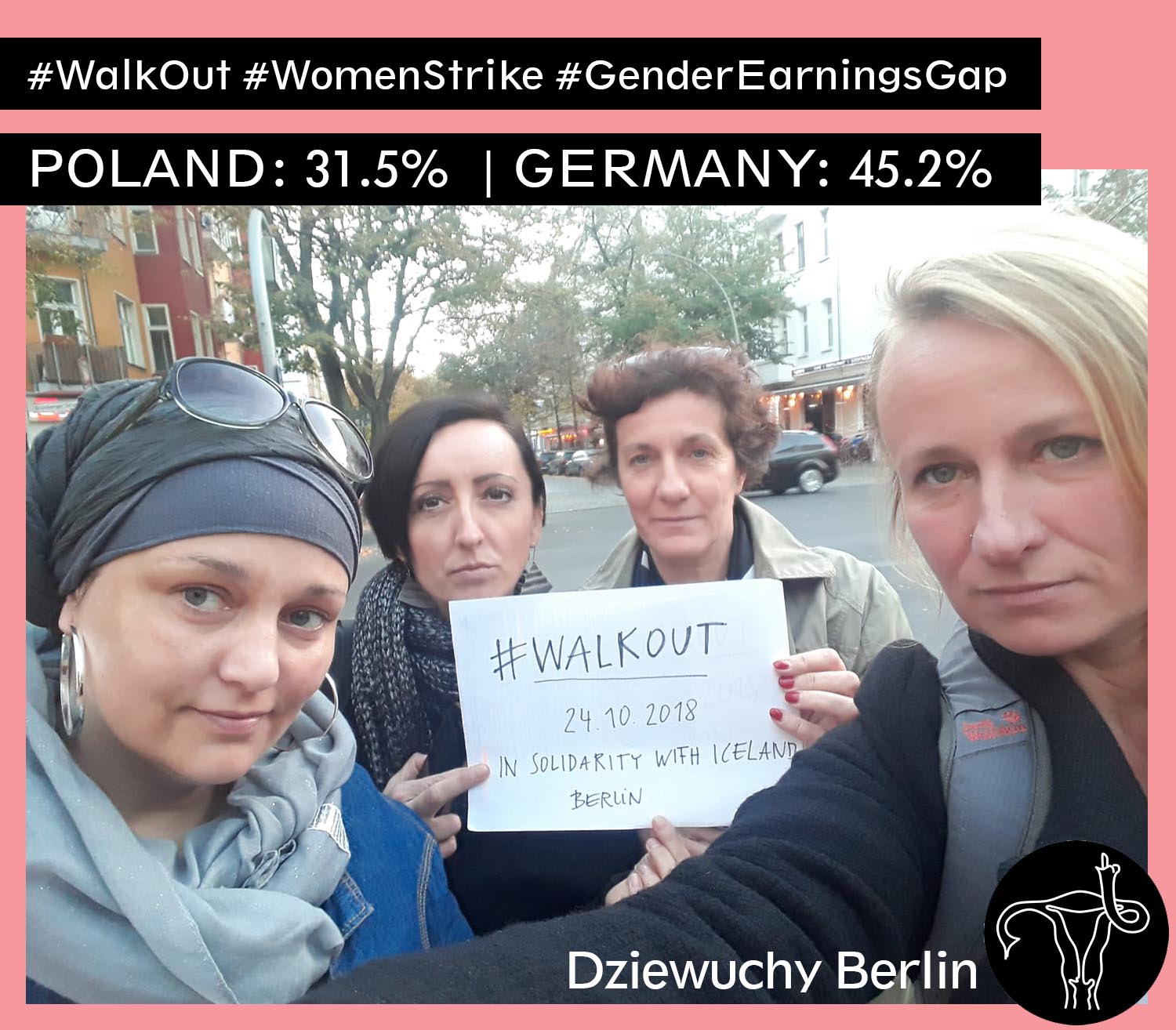